Nsiampasi Diaboki Mathieu from Congo gets Surgical Excision for Gangrene

Nsiampasi is 66 years old from Congo who started developing gangrene in his left foot in 2011. Finally, he got a permanent solution in India. Read more to know his story.

Since 2011, Nsiampasi started developing obstruction in his peripheral arteries. His arteries developed calcification due to which he started developing numbness in his feet and legs. Over time, Nsiampasi’s left foot developed dry gangrene. He was able to notice changes in skin colour. The skin of his foot started turning red along with black patches. He also developed swelling which did not go away. 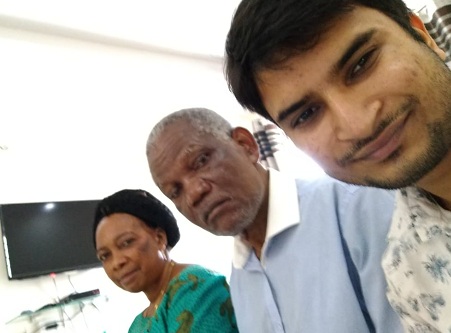 In Search of the right doctor

While he was looking for the best cardiac surgeons in India to treat the root cause, he came across the website of Vaidam. As he read about it, he came to know that it could facilitate his entire trip without him having to worry about anything. As mentioned, he submitted the problem and received a call back shortly after that. The case manager, Aditi Sabharwal talked to him and asked for the reports. She then shared the reports with some of the best cardiac surgeons to get their opinion. After all, this was done, he received a list of hospitals, a few doctor’s opinions and their detailed profiles. Nsiampasi went through everything and finally decided to visit Artemis Hospital, Gurgaon.

Appointment with the doctor

As soon as he arrived in India, his appointment was booked with Dr Murtaza Ahmed Chisti, who is one of the finest cardiac surgeons. He listened to the entire story patiently and evaluated the patient carefully. After sending him for further investigations, the doctor concluded that the part of the foot affected with gangrenous needed to be removed surgically.

Nsiampasi was taken aback for a while but then gave his consent as there was no other option left. The affected area was removed surgically and he was put on medications. After following up with the doctor for a few days, he finally went back to Congo.

“I am grateful to Vaidam and the hospital staff for taking care of everything and making my journey much easier than I expected.”

Cyril from Sierra Leone Happily Goes back Home After a S ...

Anvar Muradov from Uzbekistan is Relieved after getting ...

Haruna from Nigeria Gets Treated for Prostate Cancer