Treated for Frozen Shoulder in India at Artemis Hospital, Randy Berthelette from USA is all Set to Get Back to Adventurous Life

Adventurous activities are lot of fun, especially for seekers of thrill and go high getters of the rush of adrenaline. These activities involve a high degree of risk and poor execution of the activity can cause serious injuries. So is in this testimonial.

Randy Berthelette, a 50-years-old USA resident, is solivagant who is always in search of adventurous activities to quench his thirst. Back in 2010, while wingsuit flying, he lost his balance and hit right-side of the shoulder with cliff. He thought he was fine until he finished his flying and went to change; where he found that he has bad shoulder pain. His friends took him to a nearby hospital, where his X-Ray was done. “You might have a small tear in your rotator cuff,” said orthopaedic surgeon and sent him home with a script for eight weeks of physical therapy and suggested him to not to try any adventurous sports for few months.

Fast forward, after 6 and half year, one morning in early December, he woke up with throbbing pain in his right shoulder. It was getting worse so he began marking time with doses of ibuprofen. He also tired physical therapy sessions but no relief. “When I tried to move my arm, it was like someone was jabbing me with a kitchen knife. After few weeks of torture, an MRI revealed a diagnosis unseen in X-ray “Frozen Shoulder”. Frozen shoulder has four stages: inflammation, freezing, frozen, and thawing.

His orthopedic explained that left untreated, the capsule becomes inflamed then frozen. The process can last for months, even years, before resolving as mysteriously as it begins. Getting the disease resolved depends on matching treatments to stage. In the frozen period, when tissue becomes rock hard, surgery is recommended. Mr. Berthelette was in late stage 2 and for this, he was asked for capsule distension procedure. Unfortunately, this isn’t covered by many USA insurance plans and therefore many doctors don’t want to do it. 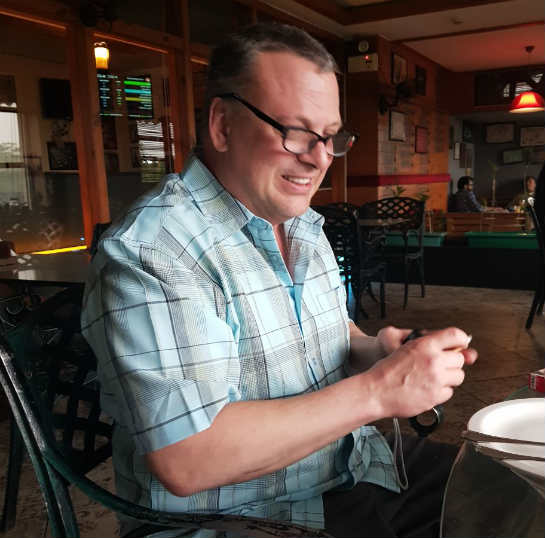 He was on waiting list for this treatment plus insurance company was going to pay only small portion of the actual cost spent. His pain was getting unbearable day by day; this is when he decided to get treated out of USA at one of the best orthopedic hospitals for shoulder in India, where he can get treated plus save some bucks. He raised the query for shoulder treatment on Vaidam, which was answered by asking his medical reports. After sharing reports with the hospital, options were shared and Randy selected Artemis Hospital, Gurgaon for the treatment. His appointment was fixed for 25th March with Dr. IPS Oberoi.

“After close examination, I was recommended for shoulder surgery. Dr. Oberoi explained the procedure in brief that first, fluid will be injected into a shoulder, and once problem is clearly identified small instruments will be inserted to repair it.”

The procedure went as expected and he was discharged from hospital in two days. After 10 days of surgery, Dr. Oberoi gave him a green signal to fly back home but asked him to avoid heavy lifting or adventurous sports for 5-6 months. Now, Mr. Berthelette wanted something more to be improved in his personality that was his teeth. He underwent got veneers installed (Read story here) before leaving back to USA.

“I am no longer in constant pain and feel much better now! I hope I will be like my old self again. I have tried to make some healthy lifestyle changes like losing weight, eating healthy, etc. This shoulder pain has made my life boring and has given so many sleepless nights. But after a few months, I can bask in joie de vivre of life. All thanks to Vaidam and Dr. Oberoi - one of the best shoulder surgeons in India.”

US couple gets a comprehensive health checkup in India

Read the Story of Haniya Algheilani from Oman, who beats ...

Suffering from Recurrent Spinal Tumour and Paralysis, An ...