Abil, who is from Myanmar came to India to get her father’s treatment. His father had been suffering from a type of bone cancer. “His bones are constantly paining. The doctors in Myanmar have suggested radiotherapy sessions. He has already received one of the sessions. One of his kidneys was also removed in 2017. I want to get him a good treatment by reliable doctors” stated Abil. 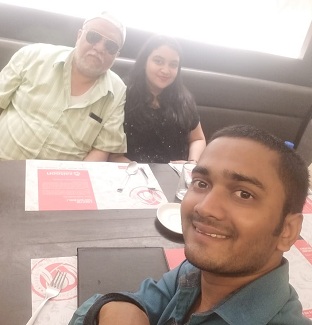 While her father was battling with these issues, Abil was recommended to visit India to get the right treatment. When she started looking for the best oncologists in India, she came to know about Vaidam Health and posted a query. In a short while, she received a call back from one of the case managers, Heena Mehta. She asked for the reports and sent them to some of the best oncology hospitals in India. She also helped to get the hospital opinions and associated quotes along with providing the hospital profiles. After going through the profiles, Global Hospital Chennai was finalized. This was followed by the initiation of the paperwork to come to India.

Getting a medical visa to India

The case manager helped in getting the Visa Invitation Letter from the hospital. The visa application form was also filled by another team member of Vaidam Health. In addition to this, accommodation near the hospital and pick up facilities from the airport. The visa was received within 72 hours.

Experience in the hospital

After the detailed consultation and investigations, the doctor told them that Mr. Kyaw Kyaw Lwin,  Abil’s father also had some tumor cells in the brain. This was indeed petrifying news to them. However, since they did not have all the reports with them, they were asked to come back again after two months to get the complete treatment. Meanwhile, medical management was advised. After a period of two months, Abil came back again with her father. Her father received ten sessions of radiotherapy and started feeling significant relief in the symptoms. “ The entire treatment took place in great condition. We are very happy and satisfied with the treatment. He is feeling very well now. Thanks to Heena Mehta for suggesting the best hospital and Monjirol for taking care of everything.”

12 years old Thiam Abdoulaye from Guinea Returns with a ...